There are currently around 2.63 million foreign citizens residing in Japan, up approximately 170,000 from the previous year (as of January 1, 2019, Basic Resident Registration). Moreover, Japan is expected to accept up to around 340,000 additional people from abroad over the next five years following an amendment to the Immigration Control Act in December 2018, which is aimed at increasing the number of foreign workers accepted into the country. Under such circumstances, achieving "multicultural coexistence" is becoming an increasingly urgent issue in local communities.

Since 1985, the Japan Foundation has been hosting "The Japan Foundation Prizes for Global Citizenship" program that awards international exchange organizations with strong ties to local communities. We also undertake a follow-up project to share information and build networks among award winners. In the fiscal year 2018, participants attended workshops and visited communities where multicultural coexistence is practiced on July 26-27, 2019 based on the theme "Bringing Together People and Cultures for a Multicultural Coexistence Society." A public symposium was held on July 27, in which regular citizens also attended. Here is our report on the two-day events. 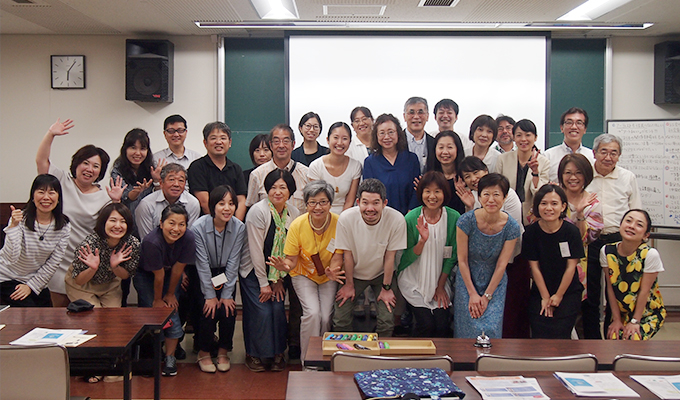 Participants in the workshop

The workshop for this year's program was held in Yokkaichi City, Mie Prefecture, where initiatives for multicultural coexistence are being ambitiously promoted. The prefecture is witnessing an increase in new arrivals, including foreign workers and their families, mainly Brazilians who have entered the country since the 1990s. In recent years, there has also been an increase in newcomers from Asia. More than 50,000 foreign citizens currently reside in the prefecture, an increase of 6.2% from the previous year (Mie Prefecture foreign national residents/census by region as of December 31, 2018), while the prefecture's ratio of foreign residents ranks fourth in Japan (Survey by the Ministry of Internal Affairs and Communications as of January 1, 2019). Within the prefecture, Yokkaichi City is home to the largest number of foreign nationals, with about 9,800 living in the city.

Despite Typhoon Nari (No. 6) approaching Mie Prefecture, representatives from a total of 21 organizations from Hokkaido to Kumamoto, including 13 previously awarded organizations, gathered in Yokkaichi City on July 26.

After introducing their own activities, participants held a workshop in which they shared issues and examples of successes and failures under the direction of Taro Tamura, representative director of the Institute for Human Diversity Japan and Tomoko Wakabayashi, project coordinator of the Graduate School of Social Design Studies, Rikkyo University who are both members of the selection committee for the Japan Foundation Prizes for Global Citizenship 2018. During this workshop, participants exchanged opinions such as "I'm seeking ways of operating without relying on subsidies," "We need to pass on our activities to young people" and "It's hard to make our activities visible within society." They also voiced concerns with incisive comments, including "When there are communication problems even among Japanese people due to the lack of neighborhood relationships, is it really possible to achieve harmonious coexistence with foreigners who speak different languages and have diverse cultural backgrounds?" Following this, participants divided into groups to think of ideas on how to involve those relevant persons seeking connections. 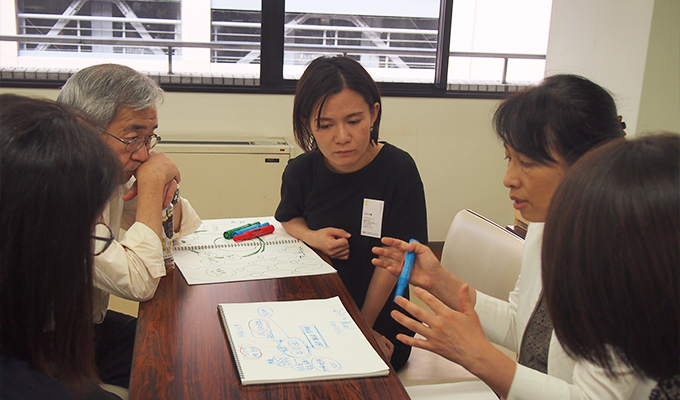 The venue was energized by positive suggestions such as those expressing a desire to spread their own model to other regions and those saying they too must change in step with rapid changes in society.

As an example of connecting diverse people in the community through art, Naoki Sugawara (producer/actor of Aging and Theater staged by the OiBokkeShi theatrical group as well as a certified care worker) introduced an art project he has been working on for three years since fiscal year 2017 in collaboration with the Mie Center For the Arts. Sugawara holds a number of events across Japan, including theatrical performances co-produced with the elderly and their caregivers as well as workshops incorporating theatrical techniques for dementia care. Under the project with the culture center, he holds workshops that integrate acting techniques into nursing care at hospitals, schools and nursing care facilities in various communities within the prefecture as well as theatrical performances by a publicly recruited cast aged from 19 to 90 (at the time of formation). Sugawara describes the power of art, noting: "Those performers with dementia who can't remember their lines play the role of dementia patients. Cultural arts have the power to reshape values so that people can enjoy, instead of grieving about, getting old." 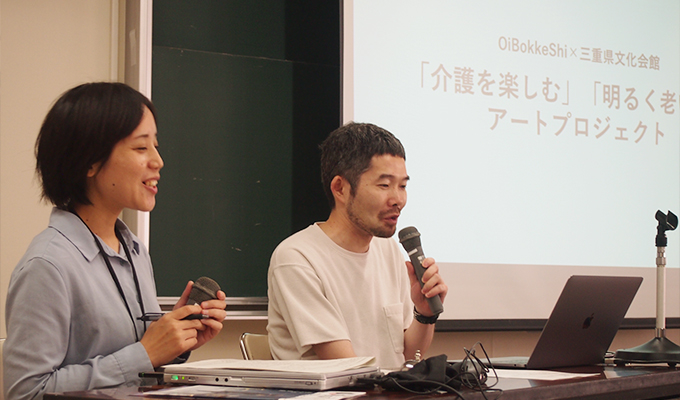 During the morning of the following day, participants visited the Sasagawa district, which is positioned as a "multicultural coexistence model district" in Yokkaichi City. Foreign nationals account for around 16% of all residents in this district (as of March 31, 2018). Participants expressed their astonishment at the sight of many Brazilian grocery stores and restaurants lining the streets and of both Japanese and Portuguese used at garbage collection points, on school cautionary notices and on traffic signs.

The Yokkaichi City Multicultural Salon established by the city in 2004 dispatches coordinators who make individual visits to homes of residents with roots in foreign countries to promote communication. The salon also holds Japanese language classes, multicultural classes for learning lifestyle etiquette and cultural courses that host regular get-togethers to create opportunities for interchanges among citizens. Participants exchanged opinions on activities in the Sasagawa district with members of local neighborhood residents' associations. The Sasagawa district has experienced occasional troubles arising from differences in lifestyle customs. Nevertheless, with a rapid rise in the number of children with foreign roots amid declining birthrates and an aging population, Japanese residents have shifted their mindset toward building good relationships with foreign residents on a daily basis as local communities may need the cooperation of foreign residents in the event of a disaster. For this reason, they first started greeting foreign nationals in the community and sought to solve problems by promoting close communications in cooperation with coordinators who themselves have roots in foreign countries. Hiromitsu Yagi, secretary-general of the Kumamoto International Foundation, went through the Kumamoto Earthquake in 2016 and shared his experiences, suggesting: "Supporting foreign victims is also important in times of disaster. In times like these, the question of how we have been connected to these people becomes apparent. Instead of just gathering people with foreign roots and separately holding disaster prevention drills, it may be more prudent to adopt their perspectives and think of creative ways to make community drills more fun to participate." 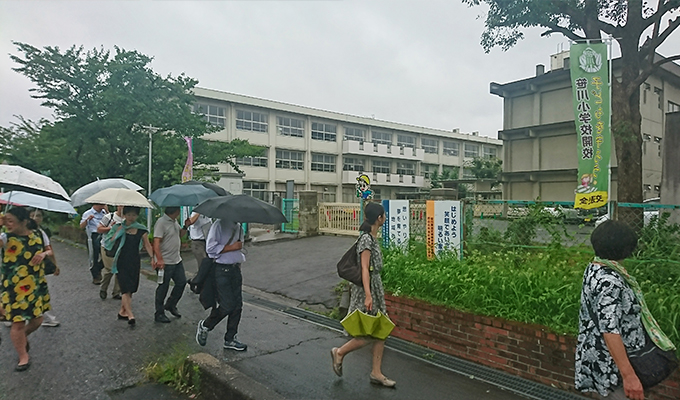 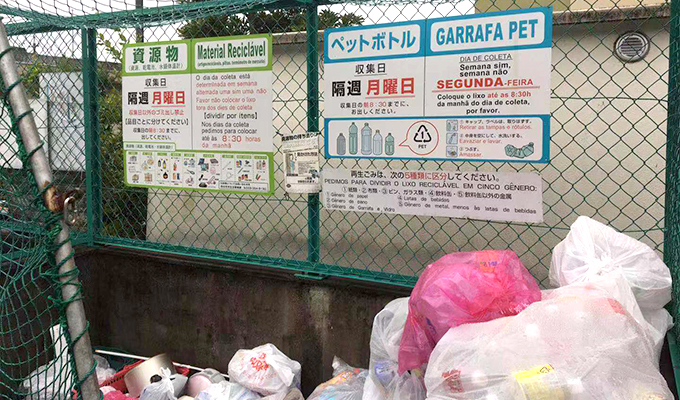 Signs at a garbage collection site are also written in Portuguese. 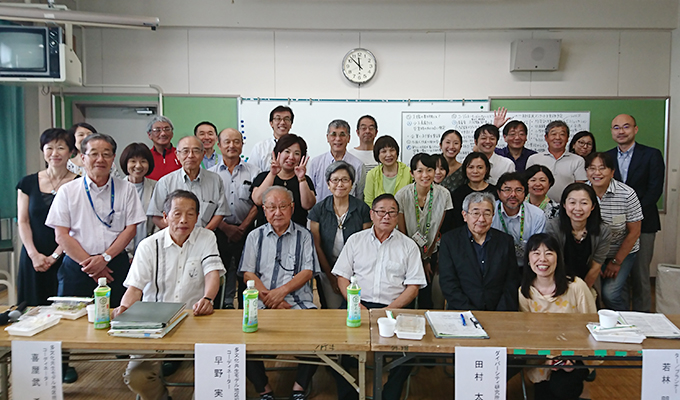 Commemorative photo with participants of the Sasagawa district

As the final program of the two-day follow-up project, a public symposium was attended by approximately 90 people, including award-winning organizations. Mie Prefecture Governor Eikei Suzuki addressed the participants at the opening session. Governor Suzuki detailed how the prefecture is incorporating diversity into its policies by establishing Japan's first Diversity Promotion Division in 2016 and formulating policies in 2017 to promote social diversity. He also introduced preschool education programs implemented in Matsusaka City to communicate the importance of Japanese-language learning and school education. The governor commented, "I hope the day comes when we can coexist harmoniously with people who have different values without having to be constantly conscious about it. Diversity is strength of Mie Prefecture and will be essential in the times ahead. I hope to make the prefecture a region where diversity advances even further."

Representatives of six award-winning organizations also made presentations about their respective activities and commitments.

Hisano Hori, representative director of Hamamatsu Global Human Resources Support (Shizuoka Prefecture), touched upon the symposium's theme of "connect." She emphasized passionately, "There are two most important actions. One is cherishing all the people you have met so far. The other is connecting with people who have not yet taken an interest in multicultural coexistence but whose cooperation is required for the successful promotion of multicultural coexistence."

Director of Koganecho Area Management Center Shingo Yamano told the audience that accepting interns from overseas has spurred a desire to build a more multinational organization. He also suggested that attendees to these types of symposiums should become more multinational as well. Program moderator Wakabayashi pointed out that "Art (activities for creative expression) is characterized by coexisting diverse values not bound by conventional thinking and is something that anyone can participate in. For this reason, art is highly compatible with multicultural coexistence." 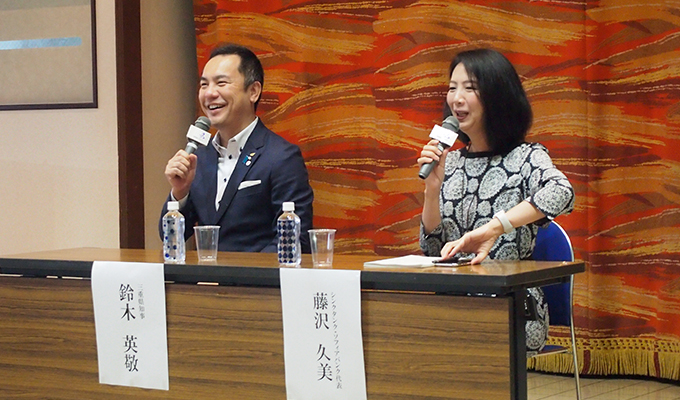 Dialogue with Mie Prefecture Governor Eikei Suzuki and Kumi Fujisawa, a member of the selection committee of the Japan Foundation Prizes for Global Partnership 2018 and co-founder of Think Tank SofiaBank

We received numerous favorable comments in a questionnaire given to symposium participants. These included remarks such as "There were a lot of good tips for our initiatives," "Listening to the passionate commitments of each organization was very stimulating," "I hope there will be a greater number of initiatives for accepting diversity through art in the future" and "Being able to create vibrant communities by taking advantage of differences and individuality was very refreshing."

Amid a rising need for interaction among different cultures within communities, we believe the role of participating organizations undertaking activities that connect people will also become increasingly vital. Going forward, the Japan Foundation will continue to support people who engage in international cultural exchange activities across Japan. 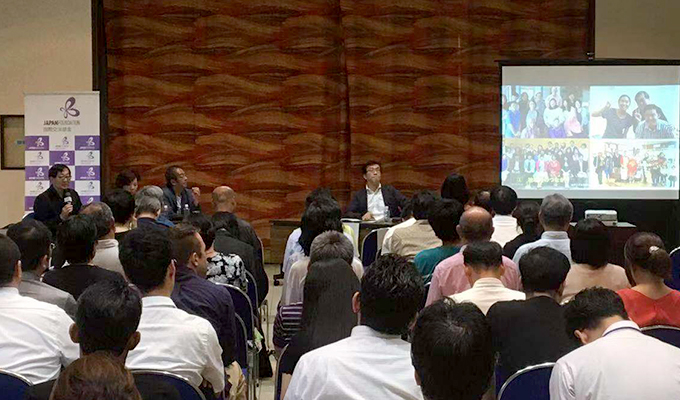 What is The Japan Foundation Prizes for Global Citizenship?
Established in 1985, The Japan Foundation Prizes for Global Citizenship is intended to support organizations that endeavor to strengthen ties and networks among citizens both inside and outside Japan and share the knowledge, ideas and expertise through intercultural exchange. The solicited activities of organizations, whether self- nominations or nominations from others, are undertaken in three fields: "Promoting regional/community development through arts and culture," "Promoting diversity of culture" and "Promoting people-to-people collaboration and international mutual understanding." Award recipients (up to three) are presented with a main prize (certificate) and a supplementary prize (2 million yen per organization). During the 34 years since the start of the awards, 106 organizations have received awards, including four Special Prizes. For details, please refer to the website below.
https://www.jpf.go.jp/e/about/citizen/index.html