The cultural exposition Japonismes 2018 received a tremendous response in France. More than anything, it was outstanding in the breadth of its perspective and the diversity of its content. It succeeded in attracting the interest of a very broad spectrum of the French public through a program that included the first opportunity to see Sōtatsu's folding-screen masterpiece Wind God and Thunder God and all 30 scroll paintings of Jakuchū's The Colorful Realm of Living Beings as well as The Shakyamuni Triad, thrilling French art lovers. At the same time, presentations such as Ryoji Ikeda's sound, light and data installation and teamLab's magnificent exhibition teamLab: Au-delà des limites, which made extensive use of cutting-edge technology, were a hit with younger generations.

A Jomon-period vessel with flame-like ornamentation and a Dogu (clay figurine) with goggle-shaped eyes provided an excitingly fresh aesthetic experience despite their ancient provenance, while visitors to the Louvre were amazed by Throne, a monumental new work gleaming in gold, installed by contemporary sculptor Kohei Nawa in the glass pyramid that serves as the museum's entrance.

Performing arts events ranged from classical theater such as the centuries-old traditions of ceremonial Gagaku, Nohgaku, and Kabuki, to the widely acclaimed Touken Ranbu musical based on a popular online game, and concerts by the virtual singer Hatsune Miku driven by cutting-edge technology. There was also an introduction to Zen culture, enabling participants to engage in group Zen meditation and shazengo (copying the calligraphy of Zen aphorisms with brush and ink), as well as opportunities to experience at first hand the aesthetic beauty of the tea ceremony, which is closely related to Zen. A series on the food culture of Japan that has recently seen a surge in popularity in France allowed participants to sample Japanese cuisine for themselves while learning about its cultural significance. Presentations of traditional Japanese crafts were accompanied by live demonstrations of the techniques by artisans and workshops, and a "Vitality of Local Cultures and Matsuri" series of events introduced folk art and performances, including a variety of matsuri festivals and dances rooted in local areas in Japan. Each of the wide variety of events in the program appealed to different audiences and participants. As a whole, Japonismes 2018 succeeded in conveying to a broad audience the overall strength of Japanese culture, transcending traditional distinctions of genre and the boundary between tradition and innovation. In other words, it communicated Japan's 'soft power,' which is to say, the strength of its cultural influence as opposed to political or economic power.

Communicating the aesthetic beauty of the tea ceremony at the Petit Palais in Paris.
(c) Graziella Antonini

This kind of awareness of the value of culture coincides beautifully with the ideology of Yukichi Fukuzawa, a pioneer who played a leading role in Japan's period of civilization and enlightenment in the years following the Meiji Restoration. More knowledgeable of the West than anyone else during his time, Fukuzawa studied the advanced technology and political systems of developed Western nations, and espoused a forward-looking argument for Westernization that viewed their adoption as urgent. However, in Teishitsuron (On the Imperial Household) published in 1882, he also argued that the Imperial House stood outside politics and society and that it should provide the active unifying force of the nation in spiritual terms. In that role, the Imperial Household was expected to provide for the preservation and patronage of scholarship and the arts. By "the arts" (shogeijutsu), Fukuzawa meant nothing less than the whole panoply of arts inherent to Japan which had developed over the nation's long history. To take it one step further, it means the civilization inherent to Japan. The pragmatic and very meticulous Fukuzawa made a point of describing this as covering a tremendously wide range of specific areas. In addition to obvious fields such as painting and calligraphy, sculpture, and crafts (gold- and silver-sprinkled makie and other lacquerware, textiles, ceramics, and copperware), he included music, Noh, flower arrangement, the tea ceremony, the tradition of kunko incense, traditional arts (with the inclusion of etiquette), and martial arts and related disciplines such as swordsmanship and spearsmanship, horsemanship, archery, jujutsu, sumo, and swimming. Also included were carpentry and plastering, bonsai and gardening, cooking, and the board games go and shogi.

This list is amazingly close to the range of cultural and artistic fields presented in Japonismes 2018. Fukuzawa referred to these various types of arts as the product of the civilization inherent to Japan, but since their origins were the human emotions supported by the Japanese way of living (art de vivre), anyone understanding such emotions can identify and sympathize with them. Undoubtedly, the reason the great French poet and expert on Japanese culture Paul Claudel had such a profound understanding of so many Japanese arts and loved them so dearly was because he was a superb artist himself. That is why his words, "les âmes en résonance" (souls in resonance) were selected to inspire Japonismes 2018. So, one could say that Japonismes 2018 provided a focus for content-rich cultural exchange between two nations possessing their own rich traditions of culture and arts, rather than a unilateral cultural declaration by Japan.

I would like to offer my congratulations to the artists who participated, and to everyone else involved in Japonismes 2018 for a job well done. 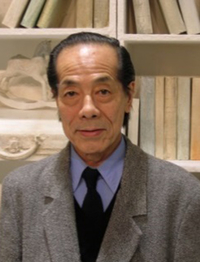 Born in Tokyo in 1932. Professor Emeritus of the University of Tokyo, director of Ohara Museum of Art, and member of the Japan Art Academy. Positions held after graduating from the College of Arts and Sciences at the University of Tokyo include professor at the University of Tokyo and director of the National Museum of Western Art. Awards and honors include the Medal with Purple Ribbon in 2000, the French Chevalier de la Légion d'honneur in 2001, and the Japanese Order of Culture in 2012. Principal publications include Seikimatsu geijutsu (L'art à la fin du siècle) and The Japanese Sense of Beauty (both published by Chikuma Shobo).