Numano Mitsuyoshi
(Professor, Graduate School of Humanities and Sociology, the University of Tokyo) 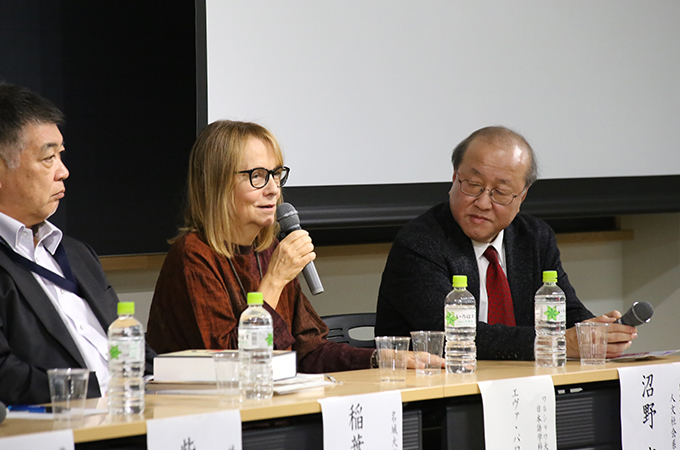 Moderated by Prof. Numano Mitsuyoshi (right), Prof. Ewa Pałasz-Rutkowska looks back at many years of research.

Professor Ewa Pałasz-Rutkowska, one of the recipients of the Japan Foundation Awards 2019, is a top scholar of Japanese history in Poland. She has made many significant research achievements and fostered many disciples as a professor at the University of Warsaw. Over many years, I have worked with her to supervise the academic exchange between the University of Warsaw and the University of Tokyo together, which is why I am truly happy she received the award. Throughout the rest of this congratulatory message, please allow me to affectionately call her Ewa-san.

Ewa-san's achievements as a scholar of Japanese history can be broadly divided into two categories: research into the place of emperor in modern and recent Japanese history and history of Polish-Japanese relations. For the first category, she began with her doctoral thesis on the Imperial Way Faction and Masaki Jinzaburō, and expanded her research to all of the modern era of Japanese history, and authored the extensive Cesarz Meiji (1852-1912). Wizerunek władcy w modernizowanej Japonii (Emperor Meiji (1852-1912). The Image of the Sovereign in Modernizing Japan; Warsaw, 2012). In recent years, she has shifted her focus to the Shōwa era (1926-1989), hosting an international conference at the University of Warsaw in 2016 under the theme "War and Peace. Japan under Emperor Shōwa."

It can be said that her other research category, Polish-Japanese relations, has become the central pillar of her research. She co-authored a book with Andrzej T. Romer published in 1996: Historia stosunków polsko-japońskich 1904-1945 (History of Polish-Japanese Relations 1904-1945; 2nd enlarged and revised edition pub. 2009; 3rd Edition pub. 2019). For this book, she studied and uncovered an enormous amount of materials both in Japan and Poland, and comprehensively handled the time period from the Russo-Japanese War through the end of World War II. It was an unprecedented, revolutionary joint history book — the first in the world on this subject. The Japanese translation by Shiba Riko (Associate Professor, Josai International University) was published by Sairyusha in 2009. This translation has become the standard first book of reference for Japanese scholars with an interest in this field. I look forward to the new translation for the 3rd revised edition from 2019 which greatly supplements the previous edition.

Following this book, she completed research on Polityka Japonii wobec Polski 1918-1941 (Japan's Policy towards Poland 1918-1941) to attain her qualifications as a professor (her habilitation thesis), which was published in 1998. Afterwards, she vigorously continued her research and investigations, publishing Historia stosunków polsko-japońskich (History of Polish-Japanese Relations),vol. II: 1945-2019 in October 2019. This is a massive book, nearly 700 pages, which covers up to the latest events in 2019. Different from the previous volume, which mainly focused on political history and international relations, this volume extensively covers cultural and academic exchange as well. 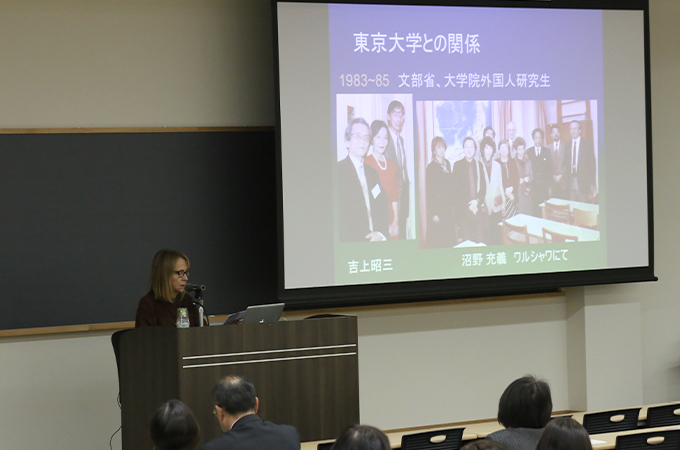 Prof. Ewa Pałasz-Rutkowska spoke about her relationship with the University of Tokyo spanning more than 30 years.

The title of her commemorative lecture was "Poland and Japan—Friendly relations for over 100 years." Speaking in impressive Japanese, she condensed the essence of her many years of research into just a 40-minute lecture. The "100 years" in the title comes from the fact that diplomatic relations between Poland and Japan were formally established in 1919, and many commemorative events were held for the centennial of diplomatic relationships in 2019. The fact that Ewa-san received the Japan Foundation Award in this commemorative year is truly remarkable.

Incidentally, a large international conference was also held at the University of Warsaw at the end of October 2019 to commemorate 100 years of Japanese studies, with a theme of "Unique or Universal? Japan and its Contribution to World Civilization." I also attended and gave a lecture in English, entitled "Strange Encounters of the Two 'Beautiful Ladies': Mutual Interest and Influence between Japanese Literature and Polish Literature." This slightly unusual title is a pun on Tokai Sanshi's Strange Encounters with Beautiful Women (Kajin no Kigu), a novel from the early years of the Meiji era (1868-1912). As Ewa-san touched upon this in her lecture, this novel was the first example of a Japanese person from the Meiji era having an interest in the doomed fate of Poland. 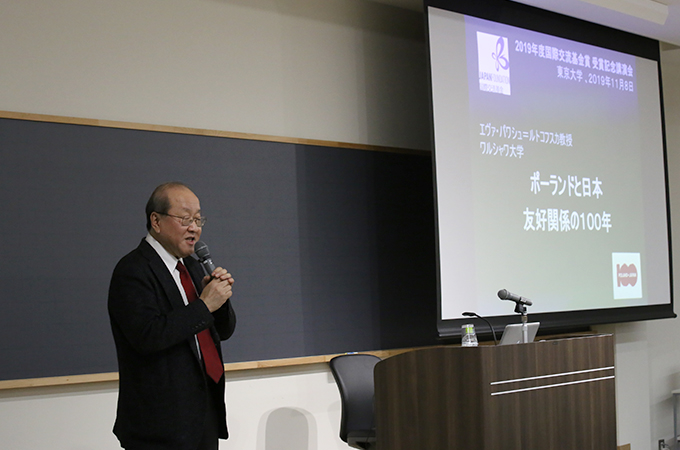 In the commemorative lecture, Ewa-san emphasized that there was a tighter political and diplomatic relationship between Poland and Japan than was expected even during a time of tense international relations and war, and this relationship was supported by the friendly attitude and familiarity between the two countries. I'd like to quote the closing remarks from her lecture. "For more than 100 years, Polish and Japanese people have not forgotten their affinity for one another. This affinity has continuously been passed down among the societies in both countries, overcoming war and the Cold War. ... We are familiar nations, despite the cultural differences and the distance that separate our two countries."

At the lecture, three people with strong ties to Ewa-san who are also dear companions to her research offered comments. They were: Inaba Chiharu (Professor, Meijo University), who traveled around Japan with Ewa-san on a research trip for W poszukiwaniu polskich grobów w Japonii (In Search of Polish Graves in Japan; 2010); Shiba Riko (Associate Professor, Josai International University), a specialist in Polish history who translated Ewa-san's Historia stosunków polsko-japońskich 1904-1945; and Hara Takeshi (Professor, the Open University of Japan), a political scientist who was Ewa-san's advisor in her research on modern and contemporary imperial family. Despite a busy schedule, they came to offer congratulations for Ewa-san's award. Through the comments of these three guests, the depth of Ewa-san's academic interest and the academic network she has built in Japan were demonstrated, clearly revealing her status as a scholar. 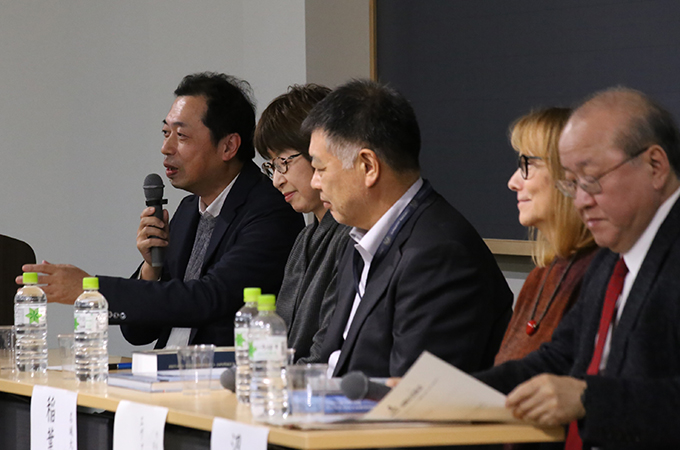 In closing, I would like to add my humble impressions from having been the moderator of this commemorative event. Just as Ewa-san emphasized, there is something truly special about the friendly relations between Poland and Japan, and Polish people are pro-Japanese in general. Her research, however, has been based on historical facts and documents, and is of a completely different dimension from the self-praises of Japan that have been pervasive in the country lately. If Polish people have a sense of familiarity with Japan (despite each country's citizens having differences akin to water and oil), there were concrete historical details and an international context to this familiarity, and the two countries have maintained a cooperative military and diplomatic relationship as well as intelligence activities even during war. What made this exceptional circumstance possible? Ewa-san searches historical materials far and wide and accurately proves her points through detailed research and analysis from the position of historical science. This international relationship that goes beyond borders is interactive, and certainly did not arise in a one-sided manner out of a vacuum. It was historically created, and it is the job of historians like Ewa-san to work out the processes in which it was created.

Of course, the ability to mutually talk about this friendly relationship between our countries is something to be proud of, but on the other hand, all around the world today, we see dangerous signs of spreading animosity toward certain countries and peoples. What is important about Ewa-san's research is that it tells us what we must objectively study about relations between countries without being misled by temporary emotions or political propaganda. It is amazing that Poland and Japan have such a mutual deep affection despite being so different and far away from one another. At the same time, however, why are there countries that lie in close proximity with one another yet cannot create such a friendly relationship? Ewa-san's research is not just narrow, specialist research necessary only for people related to Poland, but instead it also has great modern significance. 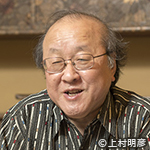