With Japan's fall 2019 hosting of the Rugby World Cup, rugby has surged in popularity across the country. Against this backdrop, global attention has turned to Sport for Development and Peace (SDP), a movement to spread the vision of leveraging sports to advance development and peace. Masatoshi Mukoyama received the FY2018 Japan Foundation Asia Center Fellowship to visit four ASEAN countries and research their implementation of rugby SDP programs, so we asked him to write this article on his experiences there and the potential for sports-driven international exchange. 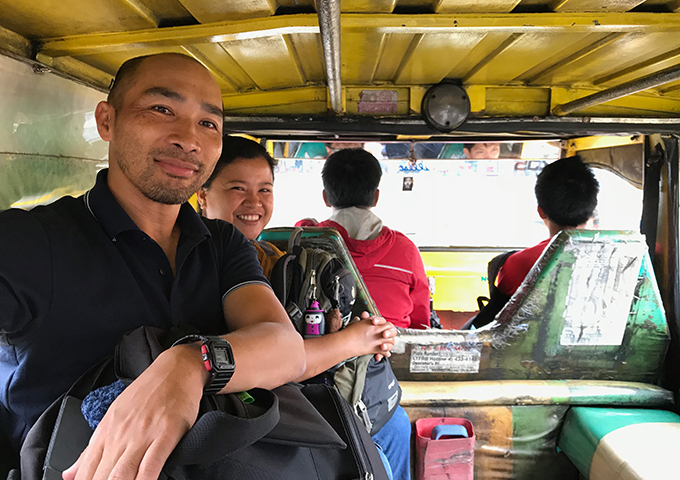 In the summer of 2018, I spent around 40 days in the Philippines, Laos, Vietnam, and Singapore under the Japan Foundation Asia Center Fellowship. My goal was to gain insights into the current state of “Sport for Development and Peace” (SDP) in Asia with respect to rugby. SDP is a concept and set of actions for using sports as a platform for social development that unlocks the potential of people (particularly those living in developing countries).

For the most part, SDP programs seek to use sports participation as a vehicle for equipping people with the power to bring about better lives and better communities. Specifically, SDP is seen as a way to provide participants with experiences that help them to more easily understand fair play and sportsmanship—values considered important for society. This comes with the hope that youths who internalize the values of sports will go on to contribute to the development of better lives and better communities.

The reason that SDP has garnered attention stems from the shared understanding that there is no single optimal solution for tackling global challenges like poverty, conflict, and environmental destruction, and that only by implementing a combination of diverse approaches can we hope to resolve those challenges. This has given rise to expectations for the role that sports can play as one approach to overcoming global challenges. For example, sports that are very popular among youth can be a gateway that steers them into development projects where they can play proactive roles. And, because sports have the reputation of being a politically neutral pursuit, they can be an appealing realm of endeavor for the political elite of countries and regions facing global challenges. In these ways, SDP offers advantages unlike those of traditional development projects, and thus is seen as having the potential to complement such projects.

The SDP programs of recent years are noted for being inspired by sports mega-events such as the Olympics and the FIFA World Cup. One example is a project called “Sport for Tomorrow” that, during the lead-up to the 2020 Tokyo Olympics/Paralympics, aims to communicate the value of sports as a force for leading the world to a better future. Another is the “Asian Scrum Project” (ASP), a rugby SDP initiative that is spearheaded by the Japan Rugby Football Union and was spurred by the 2019 Rugby World Cup. ASP seeks to foster friendly ties between Japan and other Asian countries through efforts to spread rugby across Asia. In this program, however, rugby is not simply a means to an end. All ASP activities are grounded in two values cherished by the Japanese rugby community: “There are no sides once the match ends” and “One for all, all for one.”

ASP's projects include “Pass It Back” (PIB), an initiative run by the international NGO ChildFund in several countries, including those I visited for my Asia Center Fellowship research in summer 2018—the Philippines, Laos, and Vietnam. The goal of PIB is to provide disadvantaged youth with a rugby-based curriculum that instills them with life skills needed to solve the challenges they face. 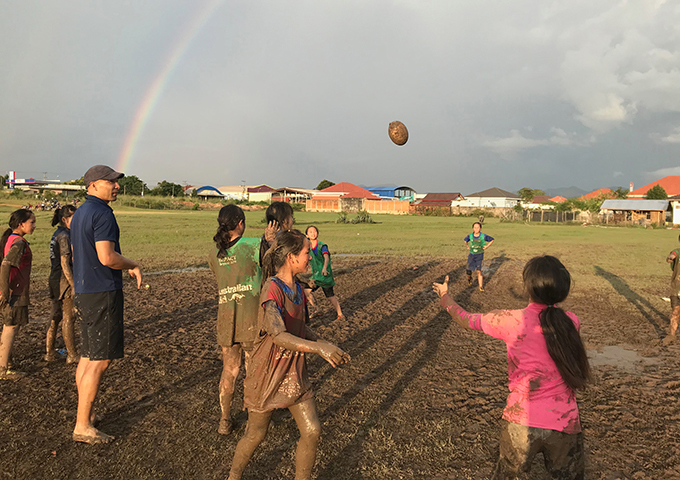 Let me share some of the memorable experiences I had. First, there was the sight of many women playing rugby. I got the impression that their communities had cultural norms that limited opportunities for female participation in sports. In other words, it seemed that the women may have been attracted to rugby because it was one of the few sports accessible to them. Another thing was that rugby, introduced by PIB to the communities for the first time ever, seemed to be a gender-free sport for them because of its obscurity. Consequently, compared with soccer and other established popular sports traditionally viewed as masculine pursuits, rugby had a gender-neutral aura that likely made it more appealing to many of the women.

Also, I found that PIB provided opportunities for acquiring life skills not only to the participating children, but also to the young instructors who were responsible for running the local curriculum. It seemed that the instructors, as young members of communities where the elders continue to play sizable roles in society, had limited opportunity in everyday life to serve in positions of responsibility, but PIB gave them that chance. Moreover, PIB was an opportunity for the instructors to make valuable contributions to the community through their efforts to expand the future potential of the children they led. As these examples illustrate, my Asia Center Fellowship research revealed to me that rugby SDP initiatives in Asia provide opportunities for not only cultivating life skills, but also correcting gender inequalities and creating youth employment. 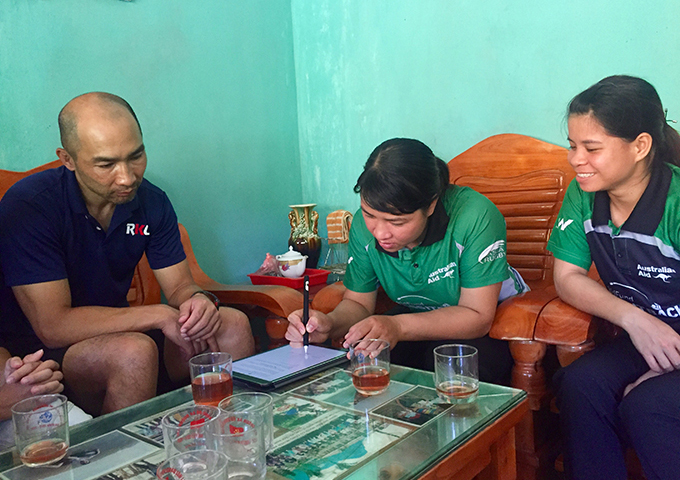 Preparations for conducting research interviews of coaches in Vietnam

In the places where SDP programs are carried out, there is a shared awareness emerging that the specific roadmap for the better lives and better communities envisioned by SDP should be drawn up by the people participating in the programs, rather than everyone involved in organizing and running the programs. At the same time, however, I think it would be difficult to further deepen that awareness just by having the participating communities hash out the concrete form that SDP should take. I believe that the people who organize and run SDP also need to know how the program is positioned locally by acquiring a full understanding of the community's worldview, values, lifestyles, and social relationships. For that to happen, it is important to see SDP as sports-driven cross-cultural exchange and to make the effort to understand the local situation. That is, SDP needs to be viewed not as an intervention proceeding only in the direction from provider to recipient, but as an interactive partnership where dialogue takes place between both sides on a foundation built by the culture of sports. 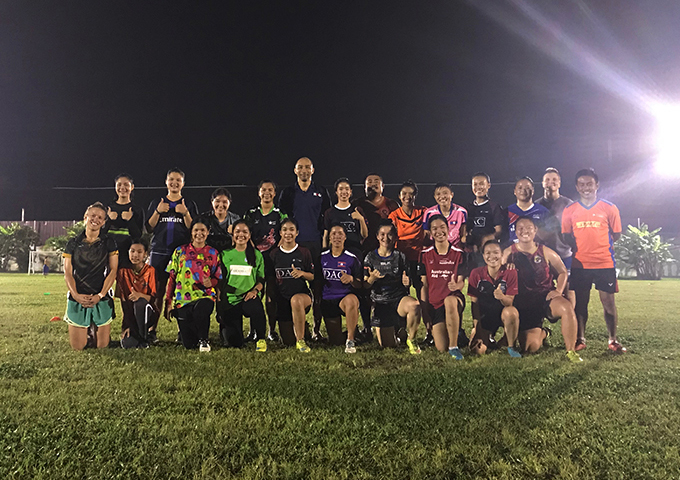 The players were diverse in age, sex, and experience (Laos)

As I have discussed, sports mega-events have inspired the pursuit of SDP programs aimed at creating better lives and better communities through sports. This movement seems to be drawing very little attention in comparison with other aspects of sports mega-events, such as the results of competitions (number of medals earned, etc.) and economic impacts. Granted, there are few opportunities in everyday life to become cognizant of the need to tackle global challenges, but the SDP movement holds immense potential for helping us to create a better future for everyone, regardless of race, nationality, religion, or any other distinctions. Going forward, I want to work together with the people I engaged with in my fellowship project to strive toward expanding the potential of SDP.

Masatoshi Mukoyama
Associate professor in Ryutsu Keizai University's Faculty of Health & Sport Sciences (sports sociology, sports management). He researches the use of sports as a tool for social development, and engages in efforts to promote such development. As an FY2018 Asia Center Fellowship recipient, he researched the use of rugby in international development programs in four ASEAN countries.