The Japan Foundation invites influential young and mid-career researchers and intellectuals from China to Japan to deepen an understanding of Japan and to build an intellectual network (between Japan and China). This invitation program began in FY2008, and in the following 11 years, a total of 192 individuals (101 as individuals and 21 groups) have visited Japan (as of the end of 2019).
This series introduces articles by past guests of this program on social issues common to both Japan and China. The third article is by Professor Gong Xiaodong of the Beijing Institute of Technology, who specializes in industrial design (FY2016 individual invitation).

Creation of Elderly-Friendly Environments in China and Japan

I was invited to Japan by Professor (currently Professor Emeritus) Takahashi Gihei of the Toyo University Faculty of Human Life Design and came to Japan in 2016 with the support of the Japan Foundation. In Japan, I spent three months studying and learning about elderly-friendly environmental design. During my stay in Japan, I not only visited many cities, but also had an opportunity to attend a review conference of the Tokyo Metropolitan Government Welfare City Creation Promotion Committee which led to a visit to a nursing home and an opinion exchange with a person in charge of universal design-based urban development in the Ministry of Land, Infrastructure, Transport and Tourism. My research and studies during this period offered me firsthand experience of the characteristics of senior-friendly, environment-creation development in China and Japan. 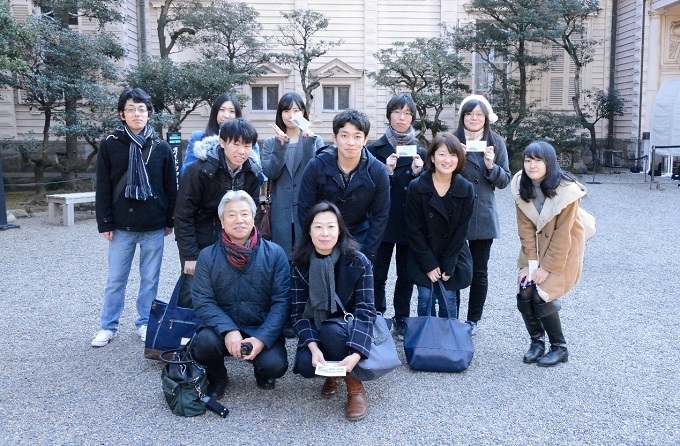 According to the UN standard, China became a full-scale aging society in 1998-1999. As of the end of 2018, 17.9% of the population was 60 years or older, while 11.9% of the population was 65 years or older (source: Statistical Bulletin on National Economic and Social Development in 2018 by the National Bureau of Statistics of China). Although the percentage of the elderly population in China is not as high as in Japan, it is still aging rapidly and its absolute number of elderly people has significantly increased.

In China, the creation of senior-friendly environments began with barrier-free construction in the 1980s and 1990s. The construction mainly focused on installations of tactile tiles and the elimination of height gaps on public streets for people with the visually impaired as the service recipients. Later, as society aged further, the target of making environments barrier-free gradually expanded to the socially vulnerable, including the elderly and people with disabilities. Today, the creation of a universal environment with wider inclusiveness is being explored.
For example, in Beijing, in order to make the home living environment more user-friendly for the socially disadvantaged, the government has set up a special fund to provide financial support for barrier-free home modifications, including bathroom renovations, indoor handrail installations, and floor leveling for households of people with disabilities and doorbell lights for the hearing impaired. With over 10 years of effort, this home modification activity is now being carried out throughout the city. Furthermore, the government has included elderly households in stages as the recipients of renovation support and gradually raised renovation standards to widely help the socially vulnerable improve their home living environments.

To improve the urban public transportation environment, Beijing upgraded railway stations and made them barrier-free, using the preparations for the 2008 Beijing Olympic and Paralympic Games as the opportunity. Among the other efforts, the stations of subway lines 1 and 2 were renovated at an early stage, and as the installation of an additional elevator was not a requirement at the time, stair lifts were installed. Other newly constructed railway stations were required to install a full barrier-free elevator. Furthermore, the Barrier-free Facility Design Code for Urban Rail Transit issued in 2009 stipulate the regulations on barrier-free construction. This resulted in installations of at least one barrier-free elevator in all train stations of all railways in Beijing, improving user-friendliness for everyone, including the socially vulnerable. 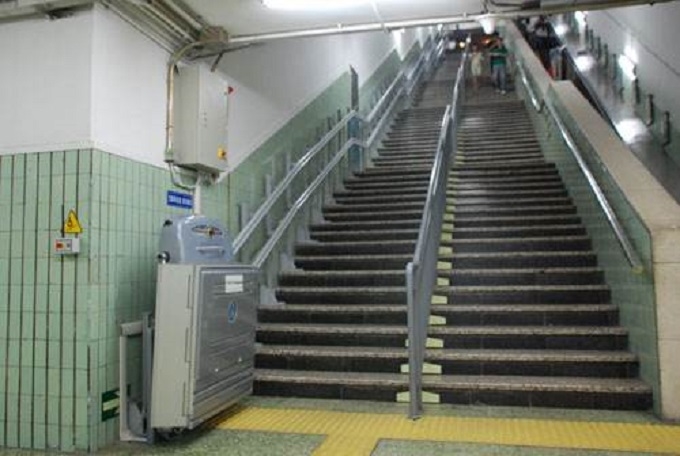 A stair lift installed in a subway line 1 station

Additionally, installations of tactile tiles and slopes, the elimination of curb heights, and the creation of facilities such as barrier-free restrooms in all public buildings and facilities have improved the standard of urban barrier-free construction throughout Beijing. These activities to provide barrier-free environments are spreading out from Beijing to public facilities nationwide.

Overall, China has so far consistently adopted the concept of barrier-free design. When examined in detail, however, the recipients of barrier-free design as a service have been gradually widened from people with disabilities to the socially disadvantaged, including the elderly, pregnant women, and children. At this point, the philosophy behind Chinese barrier-free design is essentially the same as that of universal design. It is basically the same as designing and constructing an age-friendly environment and is essentially considered to correspond to the Japanese concept of welfare design and universal design-based urban development.
At present, the creation of barrier-free environments in China focuses on facility improvements, such as making buildings, facilities, and roads barrier-free. However, a more practical exploration is needed to create a systematic barrier-free environment by connecting facilities to the environment.

In China, in addition to ongoing environmental improvements, the development of a senior-friendly social environment is also at the exploration stage. To improve the environment, it is first necessary to strengthen people's awareness of the importance of creating a barrier-free environment and to deliver better user-friendliness to the socially vulnerable, such as the elderly and people with disabilities, so that they can participate in a wide range of social activities. At the same time, it is also necessary to promote and disseminate the philosophy behind and the methods of scientific and rational environmental improvements to make environments barrier-free.

Japan entered the era of an aging society before China and has a wider range of achievements and accumulated more experience than China for the creation of senior-friendly environments. In the field of public environment improvements in particular, the following points made a strong impression on me:

(1) In a practical sense, Japan incorporates the philosophy of universal design-based urban development into environmental improvements and delivers user-friendliness throughout towns, and at the same time, it pursues rationality, coherence, coordination, and beauty. A wide environmental inclusiveness has been realized not only for physical objects, but also for communication. As a foreigner who does not speak Japanese, I was very impressed by the fact that I was able to use various transportations without any inconvenience.

(2) The Welfare City Creation Promotion Plan is practical and effective. Opinion exchanges with people in various fields allowed me to learn about many different government measures, including universal design promotion plans in important areas in Japan and education to foster consideration and kindness to the socially vulnerable, which begins in elementary school. I was deeply impressed by such efforts. These measures are effective for both universal design-based urban development and the creation of a social environment that is more accessible to the socially disadvantaged. I thought these measures constitute an approach we should use as reference and learn from them.

(3) Well-organized and thought-out services sufficiently supplement the actual environmental improvements. I still cannot forget the time I asked a station worker about transferring trains in Japan. The station worker not only gave me a thorough explanation but also guided me to the platform for my next train out of concern that I did not understand Japanese. I was deeply moved by the kindness and felt that this kind of service supplemented and enriched the inclusiveness of the environment. 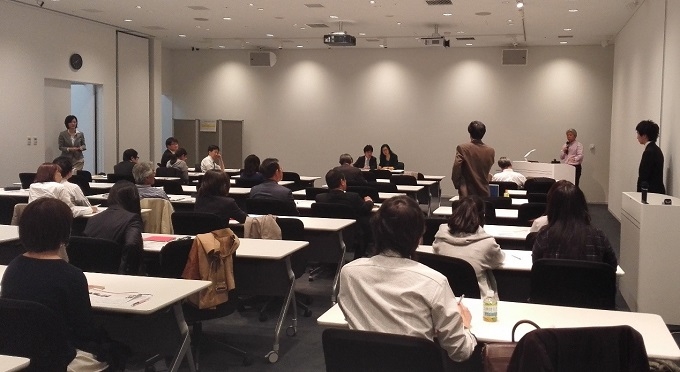 During her stay in Japan, Professor Gong Xiaodong gave a presentation on the progress of barrier-free environment creation in China.

My experiences in Japan, especially relating to the promotion of the age-friendly environment-creation plan, are valuable for China where society is aging rapidly. Opinion exchanges, interactions, and cooperation between Japan and China are also very meaningful toward supporting more socially disadvantaged individuals and promoting a wider range of senior-friendly environment-creation activities. 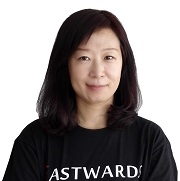 Gong XiaodongBorn in 1969, as a Professor at Beijing Institute of Technology, Gong Xiaodong takes part in activities to formulate barrier-free standards for transport-related facilities. Specializing in industrial design, she is one of a few experts who has extensive expertise in space design and universal design for transportation and architecture in China. She participated in the FY2016 Japan Foundation Japan-China Intellectual Exchanges Promotion Program and conducted research on age-friendly environmental design under the guidance of Toyo University Professor (currently Professor Emeritus) Takahashi Gihei.