The Japan Foundation invites influential young and mid-career researchers and intellectuals from China to Japan to deepen an understanding of Japan and to build an intellectual network (between Japan and China). This invitation program began in FY2008, and in the following 11 years, a total of 192 individuals (101 as individuals and 21 groups) have visited Japan (as of the end of 2019). This series introduces articles by past guests of this program on social issues common to both Japan and China. The fourth article is by Liu Sheng, Director of Green Hunan, a river conservation organization, who specializes in environmental protection (FY2018 individual invitation).

Studying Japanese river conservation is meaningful for China, which is undergoing industrialization and urbanization. I expected that studying the main pollution issues in developed countries at each stage of economic development and learning about what people and society are interested in and what roles they play in these issues would be helpful, particularly for the China of today. In China, the Action Plan for Prevention and Control of Water Pollution ("Water Ten Plan") was issued in 2015. Since then, more people began to pay attention to industrial pollution countermeasures relating to river conservation, and the government also started to take actions. However, agricultural and domestic drainage began to contaminate many rivers (agricultural and domestic pollution).

Compared to the U.S. and Europe, the Japanese lifestyle quite resembles that of the Chinese, which means that these two countries have much in common that we can learn from each other, in terms of sources of agricultural and domestic pollution. For example, pollution and the process of countermeasures against it for Lake Biwa are worth studying for the many lakes and ponds in China. Many collaborative learning programs have already been carried out (e.g., for Lake Tai in Jiangsu and Dongting Lake in Hunan).

In Lake Biwa, serious eutrophication* began at the beginning of the 1970s due to a large volume of industrial, agricultural, and domestic wastewater, which frequently caused red tide outbreaks. Now, after more than 30 years of measures to prevent the pollution, the lake has recovered its clear waters and green shores and it has become a famous tourist destination.

The key point of industrial pollution countermeasures is that both the government and businesses voluntarily take responsibility for measures. Addressing agricultural and domestic pollution requires forming a shared awareness in society by reaching out to and educating the public widely. Shared awareness and group actions are especially important when the public is the primary source of the pollution.
Many small NPOs are carrying out a wide variety of water resource conservation activities near Lake Biwa. There are, for example, organizations that specialize in firefly conservation or research on well water and spring water, or aim to disseminate recycling, such as by creating soap from waste oil. 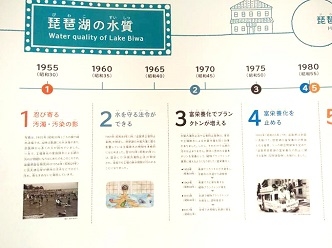 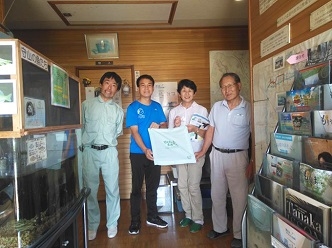 Photo with the members of a firefly conservation organization near Lake Biwa (Mr. Liu: second from the left).

During the 1980s, the Chinese government announced its policy, stating that "We will not follow the path of Western developed countries, which was to 'implement measures after pollution occurs.'" Looking back at history, however, we were polluting the environment years before that. In China, sources of pollution are being dramatically relocated, even now. These relocations have been expanded from outside of big cities to faraway regions and from the east to the middle west of China. Presumably pollution has not been improved yet, and even has deteriorated, causing large-scale relocations of the sources. Such migration of the sources of pollution accompanying the relocation of industrial areas seems inevitable in the process of industrialization and urbanization.

Although there are various types of relationships between humans and water, as well as between humans and rivers, it is humans who pollute water. What can we do to raise public interest and to promote river conservation through creating a public participation mechanism and developing products that will not pollute rivers? This is the question that we, River Watchers, are seeking to answer. With "public participation in river conservation" as the core strength, we have the long-term goal that there will "always be people watching over rivers" and we hope that everyone becomes a river watcher.

I brought back many materials from Japan and am still in the process of digesting a large volume of information. I hope to use this information effectively for my work. When I exchanged information with Japanese people in the same industry, I talked about the problems I was encountering. Just explaining the logic will not attract public attention. What the public needs to know is specific solutions, or in other words, "what they should do." In this area, I was strongly inspired by the carefulness and meticulousness of Japanese people. This is because most Chinese NPOs remain at the "logic explanation" stage.

The NPO People for Rainwater in Tokyo is a small organization. It has no full-time staff but has about 100 members across the country. It has developed a board game showing the full process relating to water pollution. It has also developed a rainwater collection device for office use, called Rain Catch. It allows users to easily collect rainwater regardless of the building structure, and I thought I wanted to install it at my house right away. I immediately bought 10 units and visited its inventor. The inventor gave me permission to use it and recommended that rainwater collection be disseminated in China. Rainwater collection in China has just begun and is not well-known. There have been almost no government policies or public education on rainwater collection. 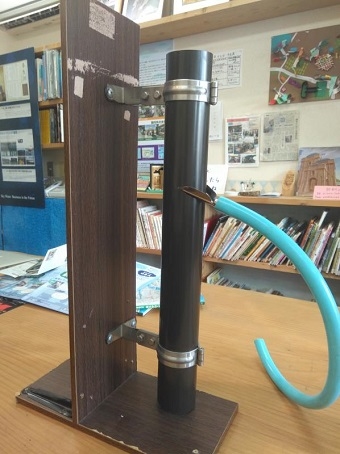 At the Eco-Tech Fair that I visited during my stay in Japan, I found trash tongs and was strongly attracted to their design, since their design concept would address our issue of promoting beach cleaning activities. When picking up trash, regular tongs cannot lift large trash. There are no tongs of the right length and they are inconvenient to carry around. It is not easy to spread the use of this kind of product, but we can still get the public to understand that picking up trash is not easy, and for those who have tongs, we can encourage them to go to riverbanks and casually take part in cleaning the environment. I heard that the trash tongs I came across had won the Japanese Good Design Award and was impressed by the Japanese craftsmanship embodied in this product too.

I also came across many similar products and situations at the Kyoto Municipal Center for Promotion of Environment Protection. The Environmental Library Corner for children had a display of information on the industrialization process and trash sorting. In addition to a rooftop rice field, there were many more interactive educational tools, and families with children could spend the whole day there. It became clear to me that the seeds of "environmental conservation" are planted and will grow in those who spend a whole day at this center, even without an educational conversation. The concept of "educate members and prepare tools, and then the public will join" was what I experienced firsthand and understanding this concept was a huge benefit of my tours and visits in Japan. I will continue to work hard and hope to bring back these excellent Japanese designs to China.

I noticed that the use of the Internet was not widespread in public-interest activities in Japan. In China, the Internet is widely used in the areas of public-interest activities and social innovation. During my stay in Japan, I introduced many case studies in China and explained how river conservation and public-interest activities were carried out. Particularly the concept of online NPOs, whose activities are carried out mainly on the Internet, attracted the attention of many Japanese people in the same field. The mission of River Watchers is to help people solve environmental issues in their communities. For this purpose, we have digitized information, prepared social media accounts, and provide the online river patrolling tool to the frontline River Watchers members. Furthermore, we have developed the Xun He Bao Program mainly for online use to support staff members to continue their activities by further simplifying River Watchers' river patrolling tasks. 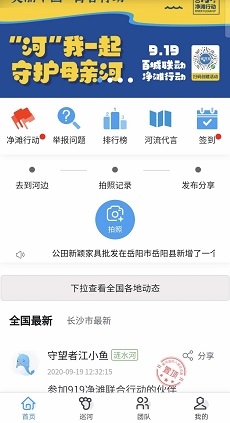 Top page of the Xun He Bao Program

During my 40-day stay in Japan, I visited nearly 40 organizations and individuals in total to achieve a better understanding of Japanese river conservation and public-interest culture. Like China, Japan also has a tightknit charity culture and a strong interest in residential areas. But public-interest activities have not gained any momentum. When I visited the Disaster Reduction and Human Renovation Institution (Kobe City), I deepened my understanding of reconstruction from earthquake damage in Japan. In China, 2008, the year of the Sichuan Earthquake, is called "the Year of the Volunteer." In Japan, 1995, the year of the Great Hanshin-Awaji Earthquake, is called "the First Year of the Volunteer Era." In Japan, participation of individual volunteers developed into the formation of volunteer teams. These teams later grew into organizations to push for the formulation of the Law to Promote Specified Nonprofit Activities ("NPO Law"), which was issued in 1998. This law primarily covers welfare, disability support, disaster relief, and environmental conservation. Devastating disasters and events provide opportunities to solve environmental issues in both Japan and China. Environmental issues are calamities for which humankind must put all its effort into reconstruction, and the results of such efforts may be a greater shared awareness.

Born in 1983 and now 37 years old (35 when I visited Japan), I began participating in public-interest activities at the age of 24 after graduating from university. I have over 14 years of experience in environmental conservation activities and I am the oldest member in our organization, Green Hunan. Meanwhile, almost all NPOs, especially environmental conservation organizations, that I visited in Japan consist of members who are older than 50 years old. Many directors who talked to me were over 70 years old. Seeing my business card, everyone said "You are so young."

Environmental conservation activities in Japan had already peaked in the 1970s-80s. The main players back then were already over 60 years old. Many river conservation organizations have serious generational-change problems, because young people are not interested in public-interest activities. I think there is a major reason for this, aside from the fact that they are not well paid (the same in China, too) and that Japanese society is aging. In other words, in Japanese society, environmental issues are no longer the most important social issues. If they were the most important social issues, it is possible to expect that, even in the present-day society, the most courageous and passionate young people who have the strongest drive for innovation would start projects and address the issues. The fact that environmental issues are no longer the most important issues in Japan should be viewed as a good thing, and Japanese people in the same field as I have no need to envy those of us in China. 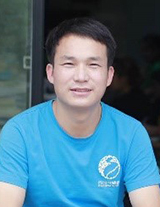 Liu ShengBorn in 1983, Liu Sheng engages in environmental conservation activities as the Director of Green Hunan, a river conservation organization. He is also known as a mid-level practitioner who has established and is managing a fundraising consulting service. He participated in the FY2018 Japan Foundation Japan-China Intellectual Exchanges Promotion Program, and as a short-term visiting international researcher of the Institute of Developing Economies, Japan External Trade Organization, conducted research on river conservation and public participation in public-interest activities in Japan under the guidance of Otsuka Kenji, a senior research fellow of the institute.