Every February, the Philippines celebrates the National Arts Month. Since 2009, when I was still working with the National Commission for Culture and the Arts (NCCA), I was actively involved in the yearly celebration of the National Arts Month, except in 2017. I was on my third month as a Program Officer-in charge of the performing arts projects of the Japan Foundation, Manila, when I was sent to attend the Performing Arts Meeting in Yokohama 2017 (TPAM). This event is internationally recognized as one of the most influential performing arts platforms in Asia. Until then, I was clueless as to the extent of influence and contribution of the Japan Foundation in the Asian performing arts scene. As a Filipino cultural worker and theatre practitioner, having been a TPAM delegate was both an honor and a humbling experience. Also, it was my first visit to Japan and my first time to "endure" the Yokohama winter. 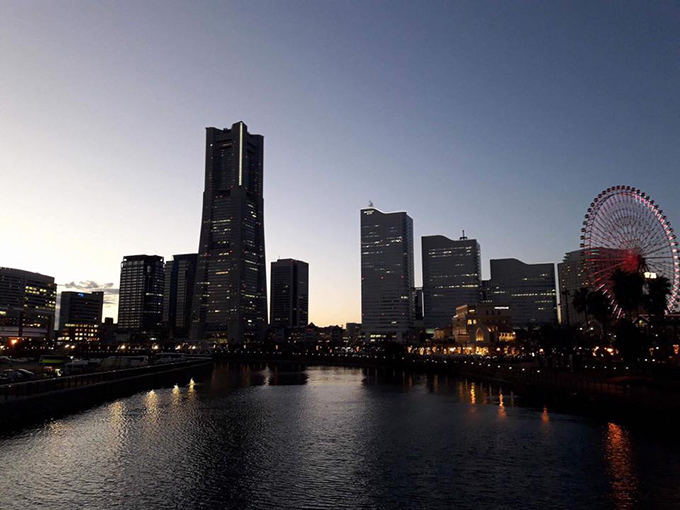 Besides networking, my most important mission in that first Yokohama trip was meeting Mr. Oriza Hirata, a renowned Japanese playwright, director, and educator, who at that time directed one of TPAM Direction's performances -- "Taipei Notes," an adaptation of his original work "Tokyo Notes" at the Yokohama Museum of Art.

In 2018, "Manila Notes" was produced, a partnership between the Japan Foundation, Manila, Tanghalang Pilipino and the Cultural Center of the Philippines. Mr. Hirata himself directed the play, while the script was adapted by well-known Filipino playwright, Mr. Rody Vera. TPAM made a successful collaborative theatre production between Japan and the Philippines. 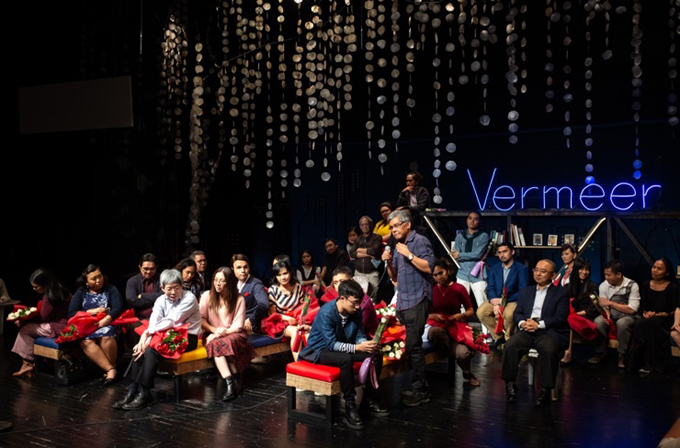 This year 2019, together with five young Filipino artists and art managers, the Japan Foundation, Manila gave me another privilege of participating in the TPAM, paving the way for a fresh encounter with the illustrious Mr. Hirata. Unlike the previous meeting when I felt so small before a giant in the world of art, this time around it was more cordial. We were at the main hall of BankArt Studio in Shin-takashima Station when he smiled and greeted me by my first name. It was like winning a lottery! This happened during the opening symposium when he expounded the theme "Japanese Contemporary Theatre - Beyond National Borders." Listening to him while he shares wonderful experience collaborating with Asian artists, including Filipinos, made me feel so proud and reassured.

TPAM 2017 introduced me to the reality that megastars in the arts really do exist. Participated by about 70 artists, producers, curators, theater and festival directors, critics, art managers, writers, filmmakers, and others, from 27 countries, this event evoked my innate interest and quest for knowledge about the history, current theaterscapes, and personalities behind this project. In time, my admiration towards TPAM gradually blossomed. The thrill and the excitement resurged upon seeing them once again in TPAM 2019. Watching "Cassettes 100," the opening performance of TPAM 2019 at the KAAT Kanagawa Arts Theatre atrium, I could not help myself but wonder that here I was rubbing elbows with some of the leaders and disruptors of performing arts. 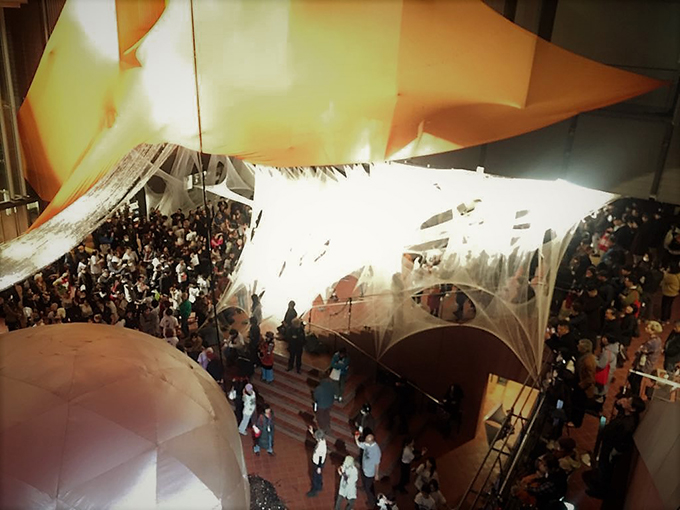 Two years have passed; the beautiful international port city looked exactly the same. Although the former three-story BankArt Studio NYK near Bashamichi Station was demolished, this led to the establishment of new bases for TPAM such as Kosha 33 and the Yokohama Port Opening Memorial Hall. While some venues were changed, TPAM's description of itself remains constant. Here is an apt quote describing the event:

"TPAM is a space where professionals from various places in the world who explore the possibility of contemporary performing arts exchange through performance and meeting programs to gain information, inspiration and network for the creation, dissemination and vitalization of performing arts. Established in 1995 as Tokyo Performing Arts Market and moved in 2011 to the 'Creative City' Yokohama. Reinforcing its focus on Asia and having started to involve itself in Asian co-production, TPAM is internationally recognized as one of the most influential performing arts platforms in Asia."*1

Arguably, each of these world-class performances deserves an in-depth review as well as its impact on the audience and the arts world. If I were to choose which two performances in TPAM 2019 I enjoyed the most as a Filipino, it would be "Cassettes 100" and "Music for Five Pianos/Two Pianos and Four Winds" under Mr. Aki Onda's direction. My reason relied on the admiration of the artists behind it and the moral/artistic/financial value of the project. 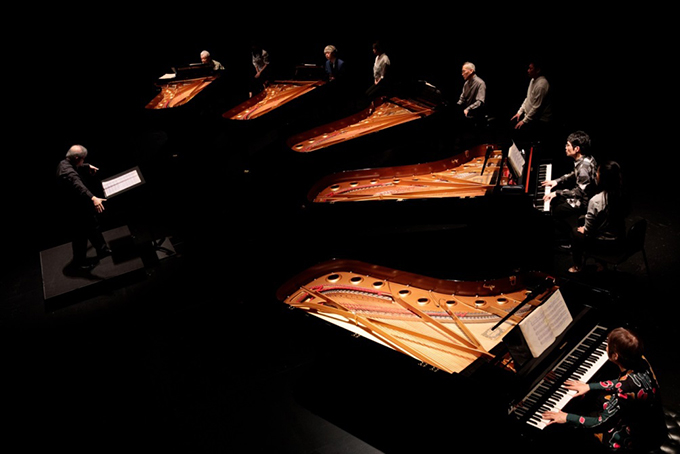 The aforementioned performances featured the compositions of José Maceda (January 31, 1917-May 5, 2004), a highly skilled Filipino pianist, professor, National Artists for Music and Philippines' first ethnomusicologist. Maceda is described in the TPAM's program as the one:

"who later made it his life's work to bridge the Western avant-garde with the indigenous sounds of his homeland, which he collected and studied through years of fieldwork.. Maceda's work is rich with cultural and historical significance, and he dreamt of creating a new model of Asian music. ... Despite these singular achievements, he remains an elusive and mostly forgotten cult figure. Outside the Philippines, his work is surprisingly under-recognized and rarely performed, and the critical discourse around his work is severely outdated."*2

Among us Filipinos, there is growing concern that until today there is an evident lack of awareness and interest in the life and work of Maceda, despite the year-long program launched by the University of the Philippine's Center for Ethnomusicology to celebrate his 100th birth year in 2017. Nonetheless, this did not deter the Japanese and New York-based sound artist/curator, Mr. Onda, from bringing two of Maceda's masterpieces to Japan. It took him five years of research and endless negotiations to be able to present them in TPAM 2019. 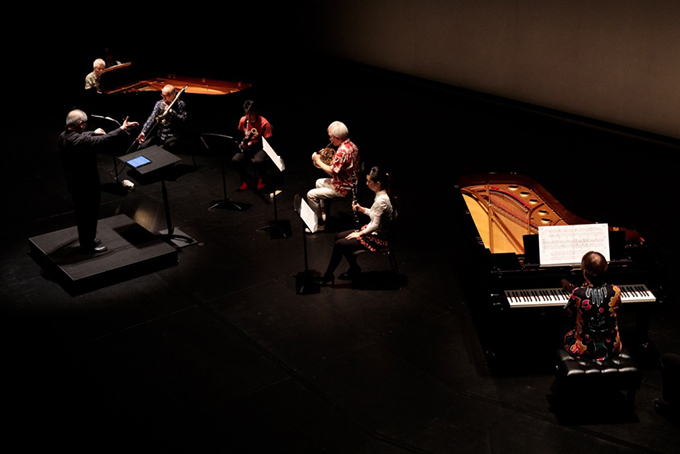 Mr. Onda's ambitious project assembled more than one hundred performers/musicians and dozens of staff members including choreographer, visual artists, sound and lighting technicians, stage managers and their assistants. Mr. Onda told me that mobilizing one hundred volunteer performers for "Cassette 100" was smooth and manageable. However, finding the instruments for "Music for Five Pianos" was extremely difficult and the TPAM officers struggled for months until Yamaha Corp. kindly decided to support the event by providing them for free of charge. Still, it was a difficult project financially, especially TPAM had to cover transportation and tuning for five pianos costs tremendously, which was the biggest part of the budget. The special performance featured Josefino Chino Toledo (a Filipino conductor-composer and university professor), Yuji Takahashi (80-year old pianist and composer who translated many of José Maceda's articles into Japanese), and Aki Takahashi (who requested Maceda to write his first piano piece Music for Five Pianos in 1993), who are all close to Maceda himself.

When asked for their opinion, Mr. Onda and Prof. Toledo opined that another performance in the next few years would pose a big challenge not only for the budget but also for the age of the artists. In short, this years' Yokohama performance could probably be the last for the three frequent collaborators of Maceda to share the stage making it not only exceptional but historical. 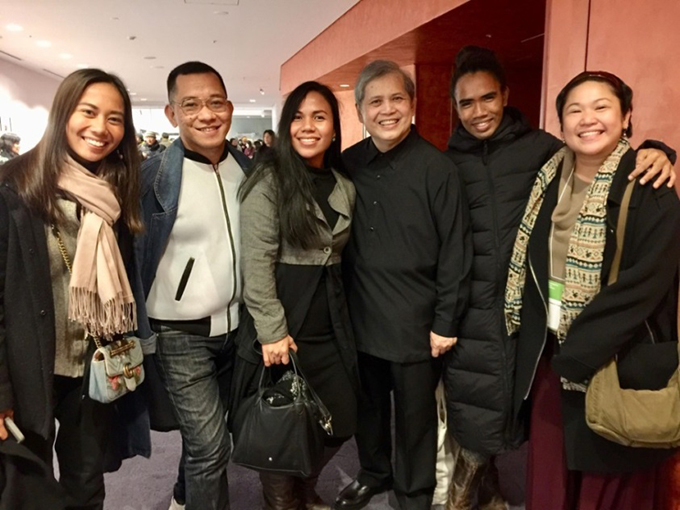 Some of the Philippine delegates at TPAM 2019: (from left) Micah Pinto, Renan Laru-an, myself, Prof. Josefino Toledo, Bunny Cadag and Franchesca Casauay.

The Philippines' February 2019 National Arts month is celebrated by thousands of my countrymen across the nation. In contrast, only less than ten Filipinos celebrated and witnessed the historic presentation of Maceda's compositions performed in KAAT. It is paradoxical that the work of a Filipino genius like José Maceda is not celebrated in his own native land but in a country not his own. The Japanese government has provided generous support for the work of a Filipino. I honestly cried watching the performance. I cannot express in words how grateful and fortunate I am to be among the ten, now the custodian of the memory of a lifetime. One thing I am sure of, these overwhelming experiences were made possible because of the people and institutions behind TPAM 2019. To them I owe this reinvigorated pride of being a Filipino who works for the Japan Foundation that provides a significant platform for art practitioners from all over the world. 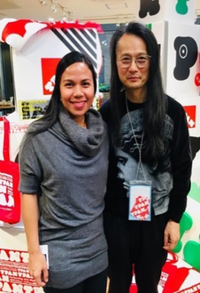 Skyzx Labastilla
Skyzx Labastilla is a program officer of the Japan Foundation, Manila. An Artistic Excellence awardee of the Philippine High School for the Arts (majoring in theater arts), she holds a BA Art Studies (cum laude) degree from the University of the Philippines Diliman. She has top-billed both lead and supporting roles in many successful plays in the Philippines. The 2018 Aliw Awards cited her Best Actress for her 2-hour solo performance portraying around twenty characters in Dulaang UP's Ang Dalagita'y 'sang Bagay na 'di Buo under the direction of Prof. José Estrella. Aliw Awards was founded in 1976 in Manila, it is the pioneer in giving awards for artistic excellence in the live entertainment industry in the Philippines.