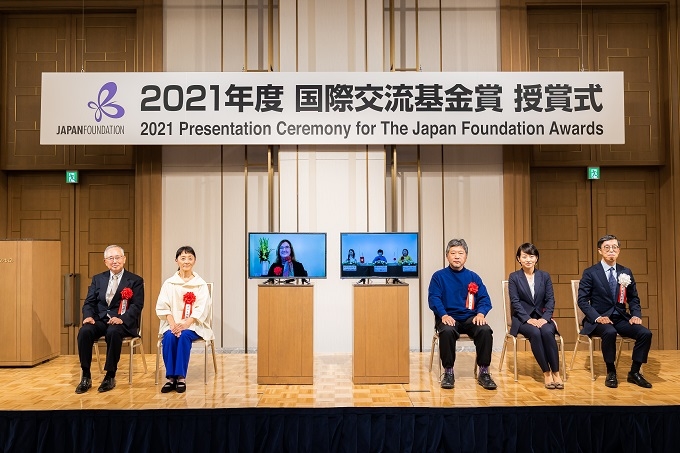 Special Feature: "Linking the World through Culture amid the COVID-19 Pandemic: The 48th Japan Foundation Awards (2021)" (for more on special features, click here)

It has been one year since the Japan Foundation Awards, which has been held annually since 1973, the year after the establishment of the Japan Foundation (JF), was cancelled due to the COVID-19 pandemic. The four diverse 2021 winners, an increase of one from the previous year, were Koreeda Hirokazu (film director), Miyata Mayumi (shō (Japanese wind instrument) performer), Deans at the Faculty of Japanese Language and Culture, University of Languages and International Studies, Vietnam National University, Hanoi (VNU) / Faculty of Japanese, Foreign Trade University / Faculty of Japanese, Hanoi University, and Dr. Irmela Hijiya-Kirschnereit (professor, Freie Universität Berlin) from Germany. The awards ceremony was held in Tokyo on October 20.
This was the first time that the awards ceremony was held both in person and via online broadcast, connecting online with the overseas award winners and some invited guests who were unable to visit Japan due to the COVID-19 pandemic. 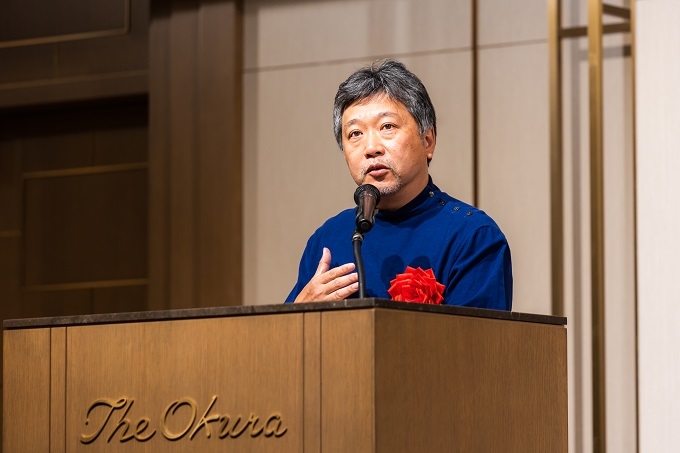 In his acceptance speech, Koreeda said, "Seeing the faces of the people I work with on films like this makes me feel once again that I am delighted to receive this award. Having participated in overseas film festivals with my debut film gave me a sense of seeing the breadth of the world through the medium of film. This is one of the reasons why I still cherish film festivals. I hope that as many people as possible in the next generation will share their experiences of international co-productions, including their failures, to further enrich and expand cultural exchange beyond Japan," concluding with a smile. 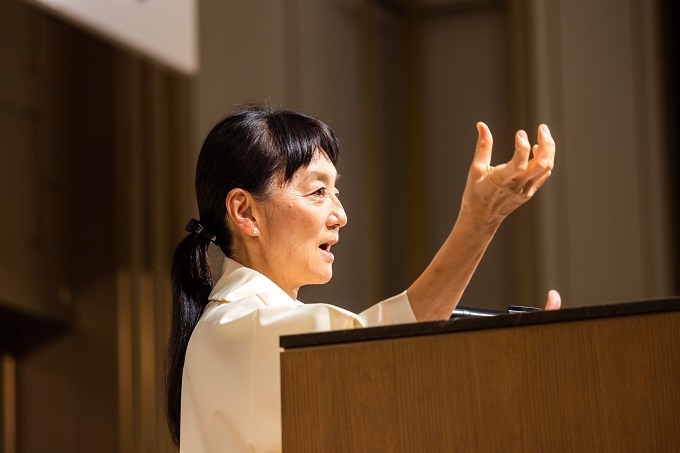 Next, Miyata said, "It is truly a great treasure for me to have met performers, composers, and staff from various countries, as well as the people who listen to my work. There are certainly various forms of discord between countries. It is also certain that there are some societies that do not recognize diversity. Yet as an individual, I have never felt put out or confused when interacting with performers, composers, or audiences. The sense of interacting with people was very pleasant. I always think that it is so peaceful on a person-to-person basis. Encouraged by the Japan Foundation Awards, I would like to continue to foster deeper exchanges with people in various regions of the world," expressing her enthusiasm. 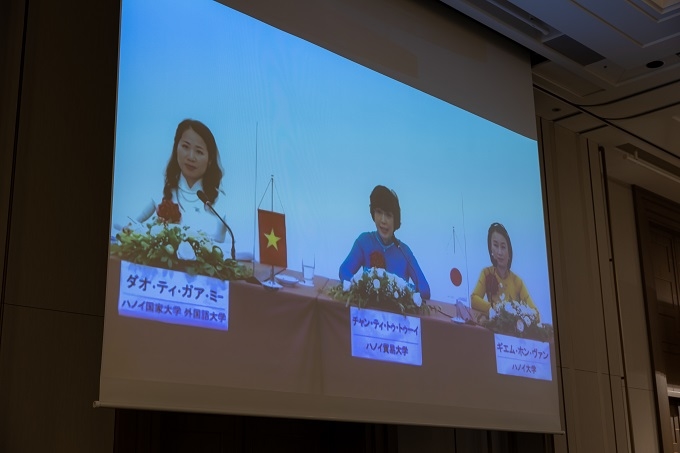 Dao Thi Nga My (Dean, Faculty of Japanese Language and Culture, University of Languages and International Studies - Vietnam National University, Hanoi (VNU)), Tran Thi Thu Thuy (Dean, Faculty of Japanese, Foreign Trade University), and Nghiem Hong Van (Dean, Faculty of Japanese, Hanoi University), via online broadcast from Vietnam, said, "Japan and Vietnam have developed a very solid relationship, and it's no exaggeration to say it's the best it's ever been. In keeping with this, economic and cultural exchanges between the two countries have become more active, and an increasing number of young Vietnamese are finding employment with Japanese companies in Vietnam and Japanese companies on the Japanese mainland. Our three universities are committed to nurturing talented individuals who can play an active role on the global stage by means of a unique curriculum that includes not only the Japanese language, but also business etiquette, social skills, and support for acquiring qualifications. Encouraged by this award, we will continue to devote ourselves to the development of Japanese-language education in Vietnam and to the cultivation of superior Japanese-language human resources in order to further deepen cordial relations between Japan and Vietnam," concluding in fluent Japanese. 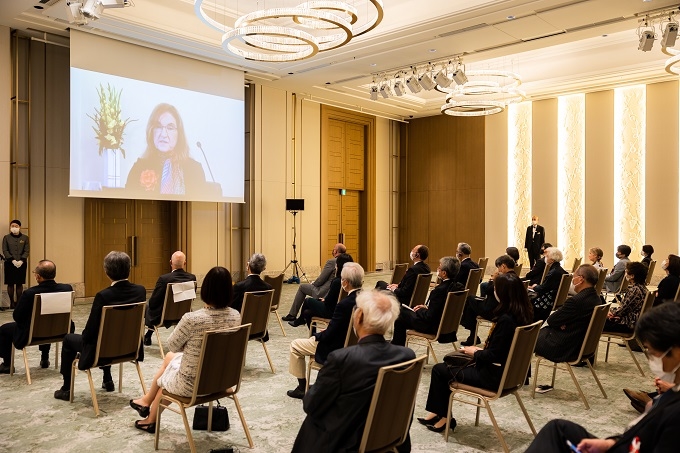 Hijiya-Kirschnereit participated online from Germany and said, "The news that I had won the Japan Foundation Award made me feel as if I were in the same wavering state between dream and reality as in Chuangtzu's The Butterfly Dream. My encounter with Japan was an extremely vital experience. Studying Japanese culture and literature has enriched me and broadened my horizons. July 7, 1970, the day I first set foot on Japanese soil and proceeded with my studies, is an important day that I celebrate every year. This award means a great deal to me. The Japanese poem "Imayō" comes to mind, but it is so self-evident that I have not been aware of it, and only recently have I begun to understand its full meaning," emotionally expressing her joy at receiving the award while quoting "Iro ha uta."

After the ceremony, an area was set up in the lobby where visitors could chat via video call with the winners who participated online. The smiles on the faces of the award winners as they shared their joy and vowed to meet again with their old acquaintances who came to see them through the video screen demonstrated the solidity of the bonds of friendship they have built.