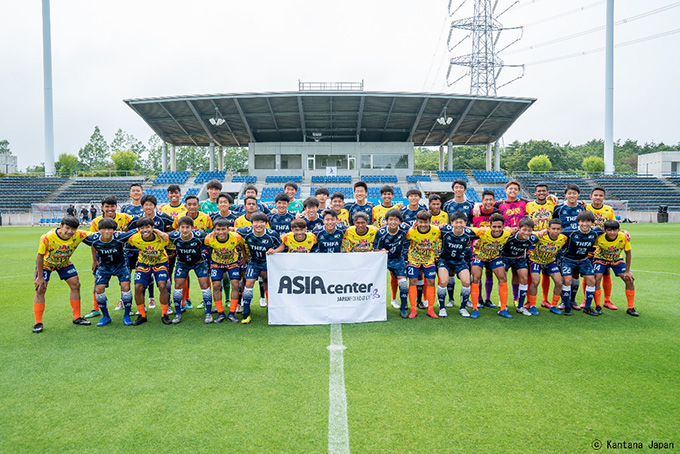 “What can we do together to help Asia evolve into a powerhouse of football?” This desire to unleash Asia's full potential on the global playing field is what inspired the 2014 launch of a Japan-Southeast Asia football exchange program by the Japan Foundation Asia Center, the Japan Football Association (JFA), and the Japan Professional Football League (J. League).
The program seeks to take Asian football to a higher plane through collaboration among Japan and the countries of Southeast Asia. To achieve this goal, Japan shares its decades of knowledge and experience in football by dispatching coaches to Southeast Asia and providing player training. At the same time, the program is an opportunity for people from across Southeast Asia to work closely together with one another in football development and, in so doing, build up bonds among their countries as both good rivals and good friends.

The culmination of five years of football exchange

This year, the Japan Foundation Asia Center, now in its sixth year of operation, is presenting the “Asia in Resonance 2019,” a wide-ranging celebration spotlighting artistic and cultural exchange programs between Japan and Southeast Asia. The festivities have included the JapaFunCup, a friendly football matchup between Japan and Southeast Asia that was the culmination of efforts made under the football exchange program.
Southeast Asia was represented by ASIAN ELEVEN, a team of male players under 18 who were selected from eleven countries in the region to create the “most diverse team in Asia.” Two youths were chosen for each country by their national football associations. Due to injuries incurred just before the event, Vietnam and Singapore unfortunately could send only one player each, so a total of 20 ASIAN ELEVEN players assembled at J-Village, the JFA's national training center in Fukushima and the Japanese football's hallowed grounds.
ASIAN ELEVEN were coached by former J. League player Takuma Koga, who currently supports youth training in Southeast Asia and serves as head coach for Myanmar's U-15 national team. Together, Koga and the 20 young men—most of whom had never met before—built up a unified team in the mere span of about one week.

Japan's squad was formed by U-18 players selected from the six prefectures of Tohoku, the first football team ever put together for the region. Like their rivals, the selected footballers meticulously honed their teamwork in preparation for the big game.
The U-18 Tohoku Selection Team were managed by a former professional player from Aomori Prefecture, Hiroshi Teguramori, the JFA's Tohoku Youth Director and formerly a special coach for a JFA project supporting the Tohoku region's post-disaster recovery.

Although rain was in the forecast for the day of the matchup, the weather cooperated and a larger than expected crowd of more than 2,000 spectators gathered at J-Village Stadium. ASIAN ELEVEN dominated the first half in terms of ball possession, while the Japanese team went on the offensive in the second. Despite both sides' fierce attempts to score, however, the 90 minutes of regulation play ended with no goals by either team, leading to a penalty shootout to determine the victor. In the end, ASIAN ELEVEN won the showdown with a score of 5 to 4. 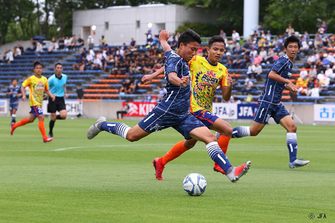 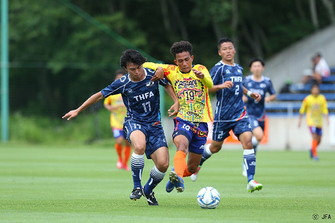 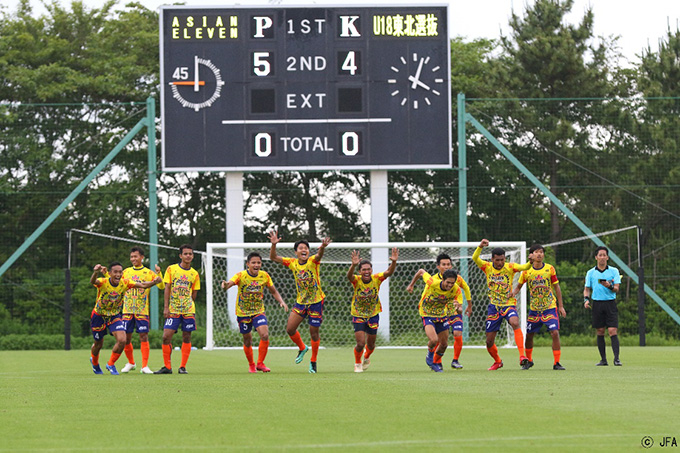 The moment of victory

Offering his take on the match, Koga said, “Every player selected was very talented, so we had an excellent game. Looking ahead, I hope that the players will continue to build up their experience on teams like this so that they can help to further improve the level of football across Asia.” Teguramori commented, “It's sad that we lost, but the Southeast Asian players were much stronger than I imagined. I think it was a good experience for the members of our team. On the road ahead, I hope to raise the standard of football in Tohoku.” ASIAN ELEVEN captain Channarong Promsrikaew (Thailand) reported, “At first, it was hard for us to communicate since we had people from so many different countries, but since football was our common tongue, we didn't have any problems in the match. It was very fun for me.”

Intense fans cheer with all their hearts

During the halftime break, a song was performed by Little Glee Monster, a vocal group endowed with tremendous singing prowess. The vocalists electrified the audience with “I Believe,” the JapaFunCup's theme song. The players were also cheered on by the designer of their uniforms, Sebastian Masuda, an artist noted for his efforts to share with the world the culture of Kawaii (cuteness) and other facets of Japanese pop culture.
The crowd included participants in artist Katsuhiko Hibino's “Match Flag Project,” who waved the original flags they made as they rooted for the players.

Go here for a special interview with Little Glee Monster 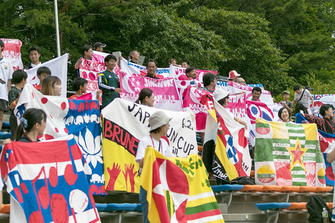 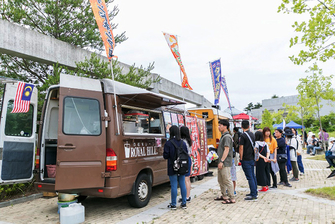 The future for ASIAN ELEVEN

The JapaFunCup was truly the culmination of the Japan Foundation Asia Center's efforts to promote the development of football talent in Southeast Asia and Japan, and the sharing of knowledge and experience across borders. Accordingly, it provided an opportunity to look back on the successes achieved by football-driven cross-cultural exchange.
The Japan Foundation hopes that Japan and Southeast Asia will continue to strengthen their bonds through friendly competition in football and other sports. Going forward, ASIAN ELEVEN is slated to engage in other exchange activities, including in Southeast Asia.

ASIAN ELEVEN's practice and friendly match in Fukushima, documented in video, is available on the Japan Foundation official YouTube.